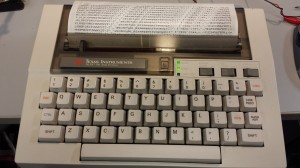 The SILENT 700 comes in several varieties. This article will document details about the model 703 that I personally have in my collection. I just recently purchased the 703 at, of all places, an antique radio show. I got it cheap enough to take a risk that it may or may not work. If it didn’t work, and if it was beyond basic repair, I would have decided to hack it for parts. It came with a carrying case, the 703 itself, and the installed roll of FAX paper. There was no power supply.

The first thing I needed to do was figure out how to power the device. The product label states it uses 20 volts AC, a power source value which I had no direct solution for. The power connector had three pins. I assumed that the outer two pins were the AC source and the middle pin was Ground. Still, I had no 20 VAC power supplies. However, I have always been able to, IN A PINCH, substitute a DC power supply in most similar cases.

The theory of an AC power supply powered device is that the external part of the power supply is only a transformer which reduces the wall socket voltage to a more manageable level. Then, the circuitry inside the device acts as a full power supply, rectifying the AC to DC and powering the internal electronics.

Throwing caution to the wind, I used a 19 volt DC power supply I had lying around. chances are, there is a bridge rectifier immediately connected to the devices power supply connector. These are used to convert the constantly switching polarity of the AC coming in, to a form of DC that the device can use. So by using a DC voltage at the start, I’ll only be using part of the bridge rectifier. The remaining pert of the internal power supply won’t see anything much different than it would normally see.

I am happy to report that my hunch worked. As soon as I turned on the SILENT 700, I got a prompt stating “703”, which is the specific version of the model I have. As soon as I typed something, The printhead started doing its line dance and printing what I typed. There is no ribbon in this device, nor is there an LCD or CRT display. All interaction is printed onto the heat sensitive thermal FAX paper. It’s the same kind of paper older FAX machines used. As the printhead moves along the line, it generates heat in a bitmap pattern, which produces the printed letters in turn. The nice thing about thermal printing is that it’s silent, hence “SILENT” 700.

There were other models made in the SILENT 700 series. I believe they were the 707 and 709 series. Those versions had built-in phone line connectivity. One would connect to the phone with an acoustic coupler (soundproofed clip-on sockets which clip over the earpiece and mouthpiece of conventional phone handsets. My 703 model does not have a built-in modem. Instead, it had a 25-pin RS-232 compatible serial port, but with a female connector.

I could have hooked this up to an old external modem, but I already had a solution in place that allows me to bridge old RS-232 connections to modern day Telnet sessions on a Windows PC using a program called RealTERM. RealTERM lets me connect this to a serial-to-USB PC connection, then using RealTERM as an echo bridge to any telnet server I choose. RealTERM manages the connection on both ends and passes data back and forth between them. It even lets me use two different modem and parity settings. The SILENT 700 only supports: odd, even, mark, and space parity values. It does NOT support the more popular “NONE” parity. RealTERM took care of the differences for me. 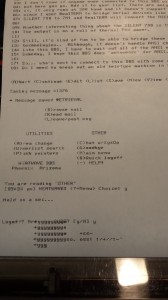 I logged onto a Telnet BBS I frequent on a regular basis, heatwavebbs.com. I was able to do most everything I could on the BBS as if I used a telnet program on a computer with a screen. The difference is, I use up paper as the SILENT 700 feeds the FAX paper through as text is being received. Plus, I was restricted to the 300 baud, so text wasn’t exactly racing up the printed page. What I ended up with is a paper trail of my online session, as seen on the right side.

There’s really not much I can do with this outside of the novelty of it. Not many modern devices support the capabilities of the SILENT 700, even if it only works at 300 baud. I could connect it to an Apple, TRS-80, Commodore Amiga, IBM PC, or any hardware device that supports serial communications with ASCII text. The SILENT 700 does not support ANSI graphics (colorized text that requires special code sequences to display). ANSI looks like garbled text when it’s transmitting to an unsupporting connected device. If a wanted, I could hook it up to a serial port on a Linux box and use it for direct shell access to administer the Linux server.

Meanwhile, it gets added to my collection along with various other unique items. I could probably put it to use on a ham radio packet setup and have it display anything and everything that gets transmitted on a packet radio net.