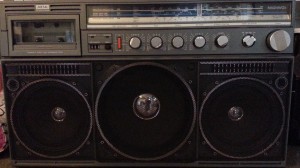 Back in 1985, during my first full year in the U.S. Army, I walked into a rather modest department store in the great town of Killeen, TX and bought a rather stylish and well featured boombox called the Magnavox D8443. It is interesting to note that as a native Pennsylvanian, I was not aware of the department store chain I went to when shopping for this. The store was called Wal-Mart, and it was not the massive department store chain it is today. It reminded my of my hometown area department store called Hill’s. Either way, I plunked down a lot of money for it, $85 I believe, so I can have a nice sized and versatile boombox radio, which were all the rage in the mid-80’s.

Some of the features which were built into this radio were considered revolutionary for a device in its price range. It had auto-stop reverse and fast forward on the tape player. Most tape players would “auto-stop” when they got to the end of playing a tape, but would simply keep running when they reached the end of the tape if you were fast forwarding or rewinding it to the end.

The Magnavox D8443 not only stopped at the end of play, but also stopped when it was done with a fast forward or rewind. This prevented the tape in the cassette from “stretching” over time.

There also were two shortwave receiver bands along with the standard AM/FM tuner, covering 2.3MHz-7.3MHz and 9.5MHz-21.7MHz. I always enjoyed scanning the shortwave band while growing up. This radio gave me the opportunity to do so without having to buy a secondary radio.

Most radios had audio controls which helped boost the bass and treble sounds and controlled stereo left/right balance. The Magnavox D8443 was no exception. Also included was a stereo control which allowed the operator to go between mono, stereo, and “spacial.” The spacial setting helped to create a surround sound effect, and it worked quite well.

As far as I recall, very few boomboxes had the ability to record audio. Many were designed to play music, and play it LOUD!!! The Magnavox D8443 not only recorded audio, but it had two built-in microphones to allow it to record in stereo! If the built-in extra-sensitive condenser microphones were not your style, and you wanted to record something more “studio quality”, you could plug in two corded microphones on the side and have better directional control of the recorded audio. To add to the Magnavox D8443’s versatility, you could connect a home stereo sound system to it through the standard line-level stereo AUX input RCA jacks. You could even hook the Magnavox D8443 up to a home stereo system using the built-in AUX output RCA jacks. It could effectively replace a standard tape deck you would normally have connected to a home system. Only this one will allow you to add 8 D-size batteries and take your tunes along with you!

Over the years since 1985, I took this boombox with me to every Army base I was stationed at. It was basically my only source for music on my desk and for those long shifts while manning a two-way radio station. It remained my “go-to” source of music playback for several years after I got out of the Army. In total, the boombox lasted about seven years before things started breaking down on it. Eventually, I simply got rid of it by tossing it in the garbage. It was useless to me now.

Fast forward about a decade, and the era of nostalgia brought on by the ever growing influence of eBay auctions, I started to get a hankering to own one of these again. I would find them here and there on an auction. It was rare to find one that worked well, or even worked at all. Those that did work well commanded a hefty price, but I was patient. Besides, most of my arbitrary spending money went to other hobbies, like collecting vintage computers and video game systems.

I found out that the Magnavox D8443 boombox developed specific problems over the years. The most common problem was a single gear in the tape drive mechanism literally disintegrating and falling out of its mechanism. Apparently the plastic used in the manufacture of this one gear starts to yellow and become brittle, rendering the tape player useless for playing tapes. The capstans would fail to turn when this gear was missing. Another thing that would happen is the tuning mechanism may bind up, because it’s string driven. The tuning knob would move a taut string which was connected to the frequency indicator and tuning capacitor. In the right conditions the mechanism would bind up due to a problem with the string getting bound up in the pulley system. That was one of the problems that eventually plagued my first Magnavox D8443. I couldn’t figure out how to “restring” it at the time.

Fast forward to 2012. I have spent an occasional amount of time searching for a Magnavox D8443 on eBay since then and finally found one that I considered affordable. Granted, it has the broken tape player gear, BUT, it was in excellent shape and had a reasonable Buy-it-Now price. So… I bought it! The pictures you see in this post are of the actual Magnavox D8443 I received in the mail recently.

I’m glad I did buy it. It’s everything I remember it being and it sounds as good as I remember, too. With today’s advancements in desktop manufacturing techniques, I plan on taking the remnants of the broken gear and either creating a mold to cast a resin copy, or redesigning it for creating a copy in a 3D printer. The gear is about the diameter of a quarter, so it might be a bit difficult to recreate either way.

In the meantime, I’m considering rewiring one of the external inputs and install the guts of a stereo bluetooth receiver and turning it into a portable bluetooth amplifier.