The world’s first color computer marketed for the masses!

Ahhhhh! Color and Sound! This went through my mind as I first saw this computer at the local Computers Unlimited while I was out shopping for a home computer with my parents. I had seen other color computers before this, but at that time, you couldn’t easily get all the extras, like software, without going to the store where you bought them. That’s why I refer to the VIC-20 as the computer for the masses. Read More for details

What’s inside this attractive little case? 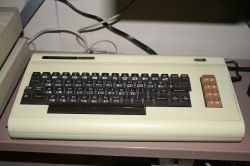 My VIC-20 has the square style keys that make more of a clackity sound. Not like the clicking sound which was similar to the Commodore 64 keyboards. I mean, these were really light and loose feeling, but didn’t cause many typing problems. It also ran off a single external transformer. The power supply was nothing more than a 120VAC to 9VAC adapter with a two-pin connector. The rest of the power supply was inside the VIC-20 case, right above the expansion slot. This resulted in HOT cartridges after you pulled them out. I remember reaching into the expansion slot once and nearly burning my fingers. The metal plate on the top side of the slot was a heatsink! 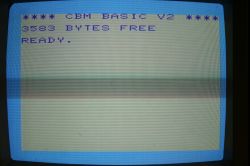 I’m showing the startup screen for those who never saw one. Sorry about the black bar in the following pictures. It was a straight camera shot at 1/30 shutter speed. I’m too lazy at the moment to hook up my video capture stuff because the VIC-20 and primary PC are in two separate rooms.

Multimedia was one of the first things I did myself on the computer, to take advantage of the full color and sound. At the time, I couldn’t afford the Adobe Flash Player for VIC-20 (just kidding). Multimedia in those days consisted of scrolling text, blocky graphics, and simple sound tones. Here are a few screenshots from a Christmas 1981 and New Year’s 1982 demo. I also included a Halloween demo screenshot. Nothing fancy, but the mouth did open and close at the press of a joystick button. 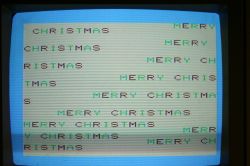 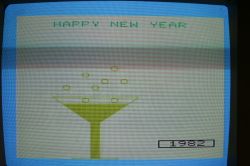 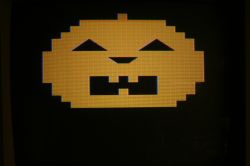 Programming was a new concept to me. At least outside of a Texas Instruments programmable calculator. BASIC was neat! I found it a little troublesome to follow my program listings because of the 23×22 screen size. This picture demonstrates the issue. However, like anything else, you get used to it. For quick color, sound, and graphics, you couldn’t beat the VIC-20 for the price.

One last picture, just for the sake of proof. A few collectors had questioned the existence of early VIC-20 models. According to my research, the VIC-20 was introduced to the US in May 1981. This warranty sticker from the vendor on the underside of my VIC-20 shows I got mine within six months of US release. 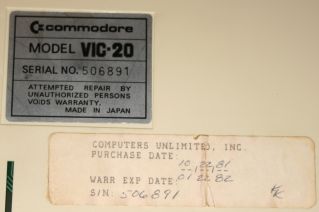