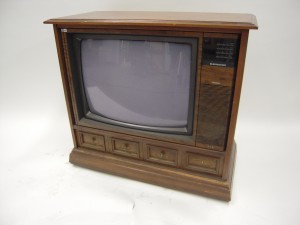 Today, many of us are enjoying the high resolution television broadcasts from hundreds of channels fed through a single 1/4” diameter cable… and you still can’t find anything good to watch! Well, consider yourselves lucky. Even thirty years ago, when cable was still being expanded to deliver clear, static free television to rural America, the available selection barely went past thirty channels.

Back then, in 1983, we didn’t have a slew of television commands at our disposal. There was no concept of picking up a remote control having more than 20 buttons, pressing “Guide”, and finding something to watch on 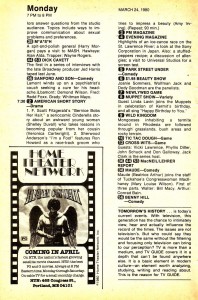 channel 219. No… we opened up a “TV Guide”, paged through to the appropriate day of the week, then to whatever nearby page listed the current time. Whatever typewritten text appeared after the show title was our “Info” button!

Back then, if we were lucky enough to have purchased a new “big screen” 25” console TV, we could grab the five button remote control and start “flipping” (not “surfing”) through the available channels. The most common buttons that were available on the remote control were Power, Volume Up, Volume Down, Channel Up, and Channel Down. Perhaps there was also a “Mute” button, so you can instantly quiet the TV to see if you thought your phone was ringing. Yes, some households had their phones in the kitchen, or in some other room except the living room, mounted on a wall or counter. Cordless phones were not reasonably affordable at the time for everyone to have one sitting on the coffee table near the TV remote.

Some more expensive television models had at least ten additional buttons, labeled 0 thru 9, to allow for direct entry of the desired channel. Believe it or not, that was a luxury some people didn’t fully consider. They were so used to have recently been required to get out of their easy chair and walk across the room to turn a knob on the TV to change a channel or adjust the volume. Simply having a few remote control buttons of any kind was considered a luxury!

Speaking of luxury, how about that screen size? It’s HUGE at 25” diagonal. Now there is no need to squint to see details on the TV screen like you had to with the 13” and 19” TVs that used to be the only affordable sizes. At a price of about $500 ($1,150 in today’s dollars) for an average 25” floor console model, you could consider yourself as “keeping up with the Joneses.” Yes, 25” was big for a television in those days. Anything bigger was prohibitively expensive, or was a dim display, narrow view projection TV. I’ll save that for another time!

But how big did a 25” screen appear to be when it was sitting across the room? Considering an average living room size to be about 13 feet between chair and TV, if you hold out your open hand at arm’s length, as if you were trying to block the view of something, you would almost be covering up the entire TV screen with your hand. Compare that today with your average TV size of 40”, 50”, or even 60” and more. But a 25” screen was still big enough to make the “ducks” on Atari Adventure look as big as Godzilla!

Getting that new 25” console TV home after you bought it was another thing. It did NOT fit in your little hatchback, even with the hatch tied down. Chances are, you had it delivered to you, or you borrowed a friend’s pickup truck. You also borrowed your friend, too. Console TVs were very HEAVY because they were large in volume and made of wood. They literally were a piece of furniture which you would decorate with flowers, candles, or the like, just like any other piece of furniture with a large top surface area. Compare that to today where we’re putting TVs with screens twice as large on top of other pieces of furniture, as if they were merely functional pieces of decoration themselves.

What else are you missing out on with modern day TVs? The chance to gain super powers from all of that x-ray radiation your Mom said was coming at you from sitting too close to the set.