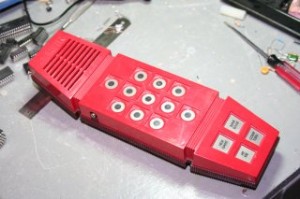 Merlin was made by a company called Parker Brothers back in 1978. It’s about the size of a man’s shoe and looks kind of like a telephone that’s red and burgundy in color  There’s a built in speaker at the top end and two sets of flat, membrane style buttons. One set of buttons is a numeric keypad with the numbers 0 thru 10, laid out like a pushbutton telephone but with buttons zero and ten above and below the numeric keypad. On the lower end of the game are four buttons labeled New Game, Same Game, Hit Me, and Comp Turn (which is used to indicate when it’s the computer’s turn to play).

It takes 6 AA batteries to operate this thing, or an optional 9V power adapter. And due to the extensive use of LED lights, it probably helped to spur advancements in alkaline battery technology at the time. You see, back then, LED lights were the latest thing in indicator technology. LCD’s, which are used in almost every handheld game today, were prohibitively expensive and reserved for devices like expensive calculators and watches. If I recall, sort of around the same year this game was made, there were an increasing amount of affordable alkaline batteries showing up on the market. These eventually started replacing the old carbon and “heavy duty” batteries which didn’t last very long in electronic games.

Getting back to the Merlin, this was one of the many popular LED based handheld toys at the time. For a toy like Merlin, at the time of single purpose LED handhelds, this had quite a few games to keep a person busy. There are six games that you can play with it.

Let me detail a couple of the individual games:

This is the same classic game we all know and love from childhood, or the occasional replay of the movie Wargames. You can only play against the computer. You don’t play with Xs or Os. Instead, your move is represented by an LED that blinks under button you press. The computer is represented by a steady lit LED. To begin the game, you press the NEW GAME button, followed by the number one, to tell Merlin you want to play game one. It’s your choice to decide who starts first. If you want to go first, simply make your move on the number pad to play the square you want. Then, you press the COMP TURN button to tell the computer to take it’s turn. Game play keeps going like this until someone wins, or gets the most squares lit. If you’d rather have the computer start first, hit COMP TURN at the beginning of a new game.

By now, some of you may have caught on to a little trick about this game. Yes, you can cheat quite easily. Just don’t press COMP TURN after your move and you can quickly get three in a row just by pressing three buttons in sequence. I’m afraid to say, it only took my eight year old son about ten seconds to figure that out on his own. I played with this game when it first came out on the market and I didn’t know about this cheat till recently.

This game plays like the blackjack card game, only there are 10 cards in the deck. When the game starts, your dealt a card which is represented by a blinking light. You have the option to hit or stand. The goal is to get as close to 13 without going over. If you want another card, press the Hit Me button. Don’t go over 13 or you lose. To stand, press Comp Turn and the Merlin will play it’s cards to get as close to 13 as possible.

This is a puzzle of sorts, similar to the computerized game of Life. When you press buttons, lights next to the button toggle their on/off state. The goal is to get the lights to end up as a lit square.

The remaining three games are entertaining also. If you don’t have a Merlin to play with, there just happens to be an emulation available called Virtual Merlin. I originally found it many years ago. It was written in 1999. Some of the regular links through a Google search lead to quite a few dead ends. But I did find an actual download on a Fortune City hosted website. The URL is

Go there and check it out if you get a chance.

For me, the outside and basic functionality of an item is just half of my interest. To be honest, if it weren’t for cats, I’d probably be the most curious being on the planet. I have a habit of trying to see what makes my stuff tick. Usually I wait until after the warranty period of an item. That happened to be a lesson I learned once or twice, at least. 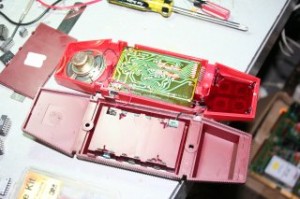 Since my Merlin is well beyond the warranty period, and they made the screws holding the case together simple and so easy to access, I grabbed my #2 phillips screwdriver and got to it. The case came apart quite easily. Inside, I found a collection of wires, a speaker, membrane switchpads, and a circuit board with mostly discrete electronic parts. Transistors, capacitors, resisters, etc. And none of those surface mount parts which make it difficult to trace the circuits. 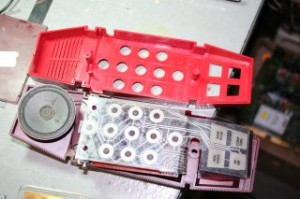