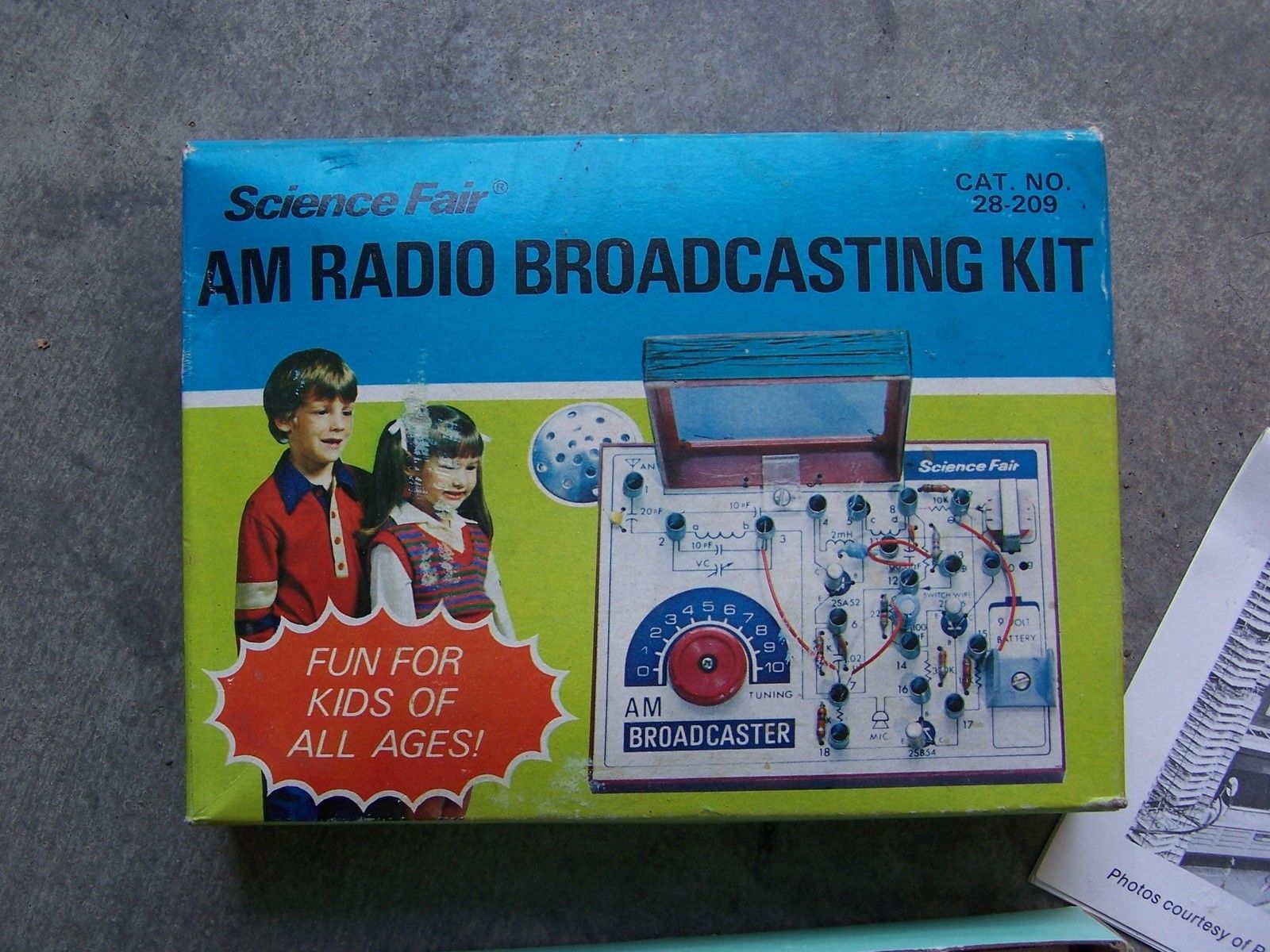 Today (October 31) in 1977 marks a starting milestone in my personal career. It was the day I stopped going out for Trick-or-Treat and got started in the world of hobby electronics. I had some money left over from a birthday gift not long before and was at the mall, hanging around the Radio Shack store, when I noticed this interesting electronics 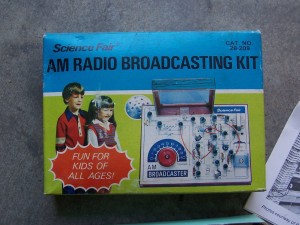 project for under $10. It was an AM Radio Broadcasting Kit. I knew very little about electronics theory at the time, but was always interested in electronic items. It seemed a natural progression for a hobby. Besides, the opportunity to be able to broadcast whatever I want to say “up to 40 feet away” for only $7.95 + tax was too great to pass up. So I bought the kit, and since then, I was hooked on the hobby!

While every other kid in the neighborhood was getting ready to go door to door for treats, I was getting ready to build a radio transmitter. I had the parts spread all over the dining room table and the instruction manual at the starting page. In other words, I did not review the entire assembly instructions BEFORE getting started on this kit, as it would have made sense to do that first. But I was just an impetuous and anxious kid.

The kit itself was relatively simple compared to other electronics kits sold at Radio Shack. There is basically a couple of transistors, a handful of basic parts like resistors, capacitors, etc., and specialty components like an audio transformer, tuning capacitor, and hand wound antenna loop. The latter was the most difficult part of the kit because it took so much time to build. Basically, you had a 3″x4″ plastic frame that was 1/2″ deep. You needed to start winding a bunch of 30-gauge (very thin) enameled wire around the outside of the frame, placing each successive loop of wire next to the previous loop. After you span the 1/2″ width, you start winding another set of loops over the first set. I think it was a total of two sets of loops. It took a lot of time for my “kid hands” to complete this, but they at least made the first set easy enough to wind by using double sided tape on the corners to keep each loop of wire in place as you wind it.

The main part of the kit is the base, which is made of white plastic having a silk-screened schematic on it. Many tiny holes are drilled in the base to put the parts leads through. This keeps the parts in place and helps to visualize the schematic to those who are new at electronic schematic concepts (like I was at the time). 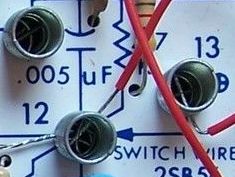 The means used to interconnect the parts electrically was not through the use of a hot soldering iron, but through innovative spring coil clips. These clips were inserted through a series of larger holes in the base. When you inserted a part, you would connect its leads underneath by sliding it between the metal coils sticking out through the bottom of the base. Multiple parts could be connected to any coil clip, thus creating the connections.

It took me about two hours to finish the assembly, including winding the antenna, and I was quite anxious to try it out. So, I took the completed kit over to the kitchen counter where the household radio was sitting and proceeded to transmit my voice. The first thing I did was tune the kit’s control to the middle of the scale. There were no official AM frequency markings on the kit. I only had to assume the labeled range of 0 to 10 represents the full AM frequency scale found on most radios.

After hooking up the 9-Volt battery, I started talking into the supplied “minimalistic” aluminum cased crystal microphone. At the same time, I started tuning the kitchen radio from one end of the scale to the other. About halfway down the scale, I heard the static diminish greatly. Tuning it just a little bit more allowed me to hear everything I was saying into the microphone… IT WORKED!!! Needless to say, I was happy to hear this. So right away, I took the kit to the dining room table and tried again… NOTHING… only static. Well, at least I learned at an early age about “truth in advertising.” Technically, it was the truth because it states “UP TO 40 feet away.” 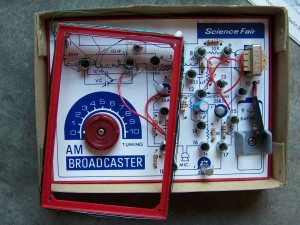 Over the next few days, I used references from electronics books in my school’s library to find out what might have gone wrong with the kit. After all, we had no Internet (or BBSs for that matter) to find solutions to the problem. What I learned was that AM is a very picky means of transmitting at low power, which is what the kit was. AM is also quite finicky, needing the conditions to be “just right” to work effectively. This includes removing obstacles that might be blocking the signal, along with orienting the antenna properly, otherwise, it’s signal distance would decrease drastically. I eventually mapped out places in the house where it would still transmit to the kitchen radio. There was no pattern to the various transmit locations, but good locations were quite spotty and scattered.

In the end, it was a good starter kit for getting into electronics at the time. For that matter, it might still be somewhat useful in that capacity today. The parts being used might be somewhat antiquated, but it would be possible to find or fabricate every part used for the circuit and recreate your own little WKRP radio station!

Attending Maker-Faire for the first time – Part 1 (a summary)