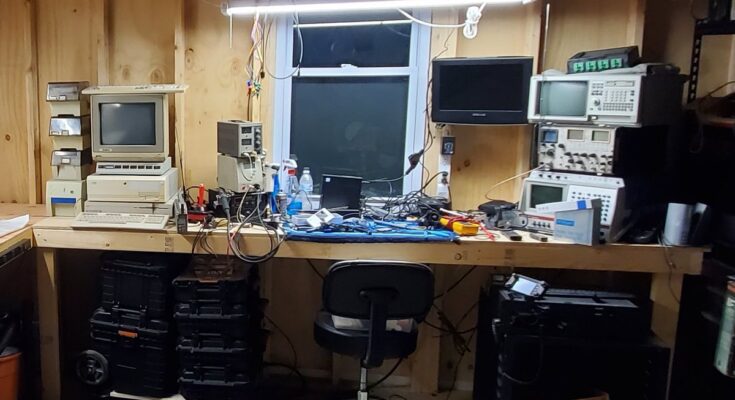 No… this is not about an unusually rare (technically, non-existent) version of a Texas Instruments Silent series of terminal devices, like the Silent 700. It’s about the fact that I haven’t posted anything new to this blog since January of 2022.

If you have been following me on Twitter in 2022, you have probably seen a lot of activity from me. That’s been about the only way I have been keeping the public aware of my finds, activities, and exploits. I really did not have much in the way of full and detailed projects to report on that would be suited more for a blog post. 2022 is the year where I finally got myself not one, but TWO logic analyzers! They are both shown in the picture below, and are about ten years apart from each other technology-wise.

This year involved a lot of change for me. Moving into another house and having a workshop built in its back yard. It’s a VERY BLUE workshop. The paint sample we picked from the contractor looked much more subdued than how the paint actually looked on the workshop itself. But at least I can’t miss the building in the dark. It could be worse… I could have painted it the same bright green color as in the Vintage Volts logo. 🙂

I have been spending a lot of time getting that space up to par for use for hobby storage and device repair… and I STILL can’t manage to configure it the way I want. However, many of the pictures I posted on Twitter this year were taken in that workshop and on the workbench.

It’s not that I didn’t work on anything. It’s just that compared to my working space at the beginning of 2022 vs. my working space now, I wasn’t as connected as I was before. At my old house, I had a massive computer system right in front of me, for which I could explore projects and readily post anything about them. Right now, I just about only have my phone to post anything when I’m in the workshop. This explains the more common use of Twitter.

It’s not that I’m not looking to get a good computer setup in the workshop. I just haven’t had the time to put in the effort. And as of now, the workshop is not effectively powered to do so. Until I can (afford to) get a contractor to run an underground conduit and sub-panel service to the workshop, I’m left with “plugging in” the building using an RV power cable connected to a 50A service once used by a hot tub when I need power in there. That also limits my ability to work on projects. I’m certainly not without project ideas. I’ve been building up a queue of them in my mind as time goes along. Perhaps I can make some of those projects a New Year’s Resolution… but we all know how those go. LOL